This week, the sky decided to take a well-earned rest from snow duty to share some sunlight.

Since I’ve been back from core course week in Gothenburg, the weather has been staying a solid 20 degrees higher than normal. In fact, so much ice has melted… I can even see the pavement now. I’ve gone an entire month not knowing (and in deep thought) about what Stockholm’s sidewalks look like.

This week is when I learned that Swedes are really just human sunflowers. Spot any sunbeam, and you’ll find a person squatting, pulling up a chair, or standing in it, eyes closed, and soaking it all in.

As a psychology student and as a person moving north on the globe, I’ve had enough conversations about the “winter blues” and seasonal affective disorder.

So, somehow I imagined that I’d notice it immediately if I ever experienced this myself. I don’t think I realized the extent to which a dark and cold atmosphere can disrupt mood regulation subconsciously.

I think the stark contrast between my levels of energy over the last sunny week compared to the weeks before that are what really highlighted this for me. I could almost feel my entire body and soul saying “ahhhh,” in a revitalized whisper, “thank you.”

With newly and fully charged brain batteries, slowly but surely, I have been doing a steady job at expanding my museum bucket list.

My Swedish Language and Culture class held an excursion to study some contemporary photography at Stockholm’s Fotografiska museum.

While there, I got to see some pretty interesting photo exhibits:

A spontaneous visit to the Swedish History Museum…

For my Glued to the Screen: TV Shows, Norms, and Culture class, our weekly field study took place at the Kungliga biblioteket (the National Library of Sweden).

There, we had a film screening of “The Black Power Mixtape 1967-1975.” With this documentary, we investigated the progression of the Black Power movement in American society from the perspective of Swedish writers and directors.

The second field study of the day was for my Psychology of Loneliness course. The class participated in a field study with an instructor to discuss different mindfulness exercises.

Saturday: A trip with my homestay sister, Sandra, to the Swedish Museum of Natural History.

The glimmer of the sun reflected off of a shiny surface. 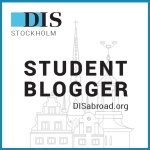